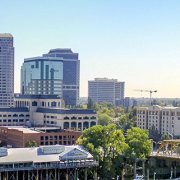 In Sacramento, and much of the media, California is enjoying a “comeback” that puts a lie to the argument that regulations and high taxes actually matter. The hero of this recovery, Gov. Jerry Brown, in Bill Maher’s assessment, “took a broken state and fixed it.”

Yet, if you look at the long-term employment trends, housing affordability, inequality and the state’s long-term fiscal health, the comeback seems far less miraculous. Silicon Valley flacks may insist that the “landscape now has been altered,” so prosperity is now permanent, but this view is both not sustainable and deeply flawed.

Since 2010, California has begun to generate jobs at a rate somewhat faster than the nation, but this still has just barely made up for the deep recession in 2007. The celebratory notion that true-blue California is outperforming red states like Texas is valid only in a very short-term perspective. Indeed, even since 2010, the job growth in Austin and Dallas has been higher than that in the Bay Area, while Los Angeles has lagged well behind.

If you go back to 2000, the gap is even more marked. Between 2000 and 2015, Austin has increased its jobs by 50 percent, while Raleigh, Houston, San Antonio, Dallas, Nashville, Orlando, Charlotte, Phoenix and Salt Lake City – all in lower-tax, regulation-light states – have seen job growth of 24 percent or above. In contrast, since 2000, Los Angeles and San Francisco expanded jobs by barely 10 percent. San Jose, the home of Silicon Valley, has seen only a 6 percent expansion over that period.

As Chapman University economist and forecaster Jim Doti recently suggested, the California boom is exceedingly concentrated in one region. “It’s not a California miracle, but really should be called a Silicon Valley miracle,” Doti noted in his latest forecast. “The rest of the state really isn’t doing well.”

Bill Watkins is a professor at California Lutheran University and runs the Center for Economic Research and Forecasting, which can be found at clucerf.org.

INVITE JOEL TO SPEAK
Zika, Rio And The Rising Health Hazards Of Megacities