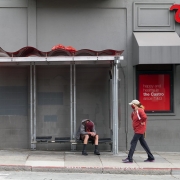 Author Aldous Huxley once said, “A thoroughly scientific dictatorship will never be overthrown.”

Even as we try to battle the COVID-19 pestilence, we may be contracting a more dangerous virus — hygienic fascism. This involves a process when our political leaders defer to a handful of “experts,” amid what Dr. Joseph Ladopo, an associate professor at the UCLA School of Medicine, describes as an atmosphere of “COVID-19-induced terror.”

Ideologically, hygienic fascism is neither right nor left, nor is it simply a matter of taking necessary precautions. It is about imposing, over a long period of time, highly draconian regulations based on certain assumptions about public health. In large part, it regards science not so much as a search for knowledge but as revealed “truth” with definitive “answers.” Anyone opposed to the conventional stratagem, including recognized professionals, are largely banished as mindless Trumpistas, ignoramuses, or worse. Experience may show that debate and diversity of choices serve the public’s health and general well-being better than unchallenged rule by a few, largely unaccountable individuals.

Even some non-Trumpians — like Elon Musk — see this as less an adherence to scientific standards than a “fascist” attempt to impose often impossible conditions on society and the economy, and without popular recourse. That these orders are often issued by the executive, and in the vast majority of states without legislative recourse, certainly follows an authoritarian pattern.

Big Brother, the ‘Great Helmsman’ and us

The degree of social control being proposed often reveals staggering tunnel vision. Former Vice President Joe Biden’s adviser, Dr. Ezekiel Emmanuel, suggests that eradication of the virus will require a year or even 18 months of lockdown policies. This likely would catapult an already steep recession into something approaching a depression. Scientists and academics, it appears, may be less vulnerable to such a policy than, say, hotel workers, retail clerks or small business owners.

INVITE JOEL TO SPEAK
One Nation, Under Lockdown, Divided by Pandemic