The presence of 100 million more Americans by 2050 will reshape the nation’s geography. Scores of new communities will have to be built to accommodate them, creating a massive demand for new housing, as well as industrial and commercial space.

This growth will include everything from the widespread “infilling” of once-desolate inner cities to the creation of new suburban and exurban towns to the resettling of the American heartland — the vast, still sparsely populated regions that constitute the majority of the U.S. landmass.

In order to accommodate the next 100 million Americans, new environmentally friendly technologies and infrastructure will be required to reduce commutes by bringing work closer to — or even into — the home and to find more energy-efficient means of transportation.

Suburbia — the predominant form of American life — will probably remain the focal point of innovations in development. Despite criticisms that suburbs are culturally barren, energy inefficient or suitable only for young families, 80 percent or more of the total U.S. metropolitan population growth has taken place in suburbia, confounding oft-repeated predictions of its inevitable decline. 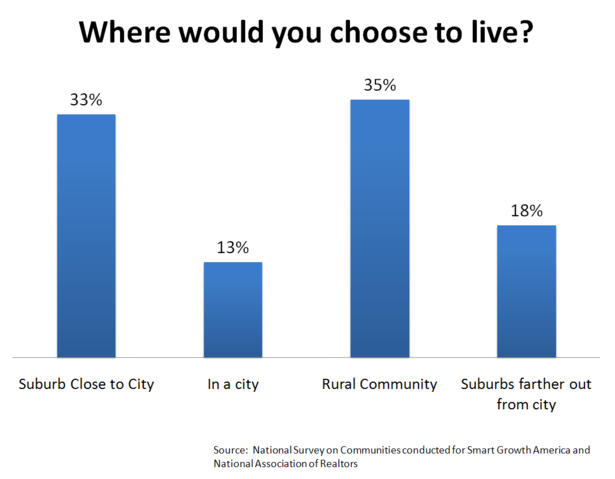 This pattern will continue to the mid-21st century. The reasons are not hard to identify: Suburbs experience faster job and income growth, far lower crime rates (roughly one-third) and much higher rates of home ownership. While cities will always exercise a strong draw for younger people, the appeal often proves to be short-lived; as people enter their 30s and beyond, they generally prefer suburbs. This pattern will become more pronounced as the huge millennial generation — those born after 1983 — enters this age cohort.

Over the next few decades, however, suburban communities will evolve beyond the conventional 1950s-style “production suburbs” of vast housing tracts constructed far from existing commercial and industrial centers. The suburbs of the 21st century will increasingly incorporate aspects of preindustrial villages. They will be more compact and self-sufficient, providing office space as well as a surging home-based workforce. Well before 2050 as many one in four or five people will work full or part time from home. 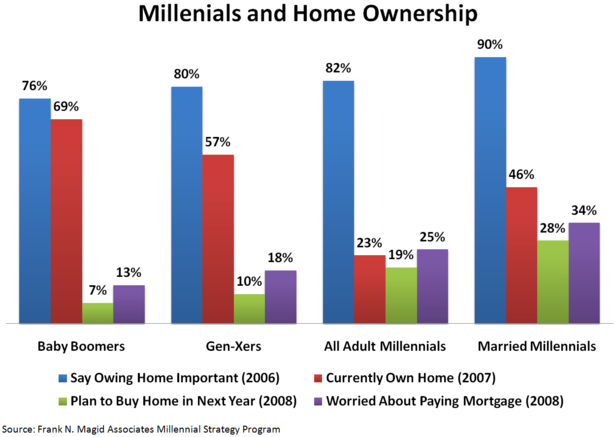 Surveys of housing preferences consistently show that if given the choice, most Americans, particularly families, will still opt for a place with a spot of land and a little breathing room. And despite the coming population growth, most Americans will probably continue to resist being forced into density, and even with 100 million more people, the country will still be only one-sixth as crowded as Germany.

The Rise of ‘Cities of Aspiration’

The continuing appeal of suburbia does not mean that America’s urban centers are doomed. On the contrary, the United States will remain a nation of great cities. Throughout the history of civilization, cities have been engines for social, cultural and economic activity. The market for dense urban existence is likely to remain small compared with suburbs, but there will still be massive opportunities to provide for the roughly 15 million to 20 million new urban dwellers by 2050.

Some urban areas such as San Francisco, Boston, Manhattan and the western edge of Los Angeles will remain highly attractive to the young, the affluent and the highly skilled, as well as some recent immigrants. After all, these cities contain many of the nation’s most vibrant cultural institutions, research centers, colleges and universities, and much of its most attractive architecture.

These cities will sit atop the urban economic food chain, somewhat aloof from the rest of country, and will experience modest growth. But for most Americans, the focus of urban life will shift to cities that are more spread out and, by some standards, less intrinsically attractive.

These new “cities of aspiration” — Phoenix, Houston, Dallas, Atlanta and Charlotte, N.C. — will perform many of the functions as centers for upward mobility that New York and other great industrial cities once did.

Perhaps the least anticipated development in the nation’s 21st century geography will be the resurgence of the American heartland, often dismissed by coastal dwellers as “flyover country.” But as the nation gains 100 million people, population and cost pressures are destined to resurrect the nation’s vast hinterlands.

Americans will head out to the hinterlands because they will find opportunities and perhaps a better quality of life. According to recent surveys, as many as one in three American adults would prefer to live in a rural area — compared with the 20-odd percent who actually do. Most Americans perceive rural America as epitomizing traditional values of family, religion and self-sufficiency and as being more attractive, friendly and safe, particularly for children.

One critical factor in the heartland’s growing relevance is the advent of the Internet, which has broken the traditional isolation of rural communities. As the technology of mass communications improves, the movement of technology companies, business services and manufacturers into the hinterland is likely to accelerate. This will be not so much a movement to remote hamlets, but to the growing number of dynamic small cities and towns spread throughout the heartland.

The heartland, consigned to the fringes of American society and economy in the 20th century, is poised to enjoy a significant renaissance in the early 21st. Not since the 19th century, when it was a major source of America’s economic, social and cultural supremacy, has the vast continental expanse been set to play so powerful a role in shaping the nation’s future.