You are here: Home1 / Articles2 / Demographics3 / America in 2050 — Strength in Diversity
Appearing in:

An ongoing source of strength for the United States over the next 40 years will be its openness to immigration. Indeed, more than most of its chief global rivals, the U.S. will be reshaped and re-energized by an increasing racial and ethnic diversity.

The United States of 2050 will look very different from the country that existed just a decade ago, at the dawn of the new millennium. Between 2000 and 2050, the vast majority of America’s net population growth will come from racial minorities, particularly Asians and Hispanics, as well as a growing mixed-race population.

By the middle of the 21st century, America will have no clear “majority” race. Today 30 percent of the U.S. population is nonwhite; in 2050 it may be nearly 50 percent. Latino and Asian populations are expected to triple. Today, because of high Latino birthrates, one in five American children under the age of 5 is Hispanic; increasingly most Hispanic growth will come from the children of those born in America. 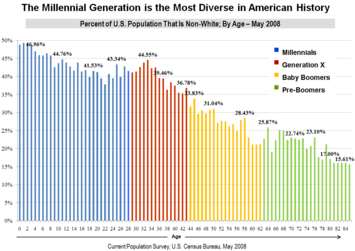 At the same time, these varying groups, and particularly their children, will become ever more multiracial in their outlook. The percentage of Americans of mixed race is growing significantly among people under 18; in California and Nevada mixed-marriage rates are at more than 13 percent, and in the rest of the Southwest a heavily Latino population increasingly intermarries with other ethnic groups.

We will see more of this kind of interracial pairing in the future. According to market research firm Teen Research Unlimited, 60 percent of American teens say they have friends of different ethnic backgrounds. Even more telling, a 2006 Gallup Poll showed that 95 percent of young people (ages 18 to 29) approved of interracial dating — compared with only 45 percent of respondents over the age of 64. Likewise, a USA Today/Gallup Poll conducted in 2008 among teens showed that 57 percent have dated someone of another race or ethnic group, up 40 percent from when Gallup last polled teens on the question back in 1980.

Europe also will continue to be a source of immigrants as many talented young Europeans continue to escape the continental nursing home by heading to the United States. But by far the largest groups of immigrants to the U.S. will come from Latin America, Africa, China and other developing countries. The United Nations estimates that 2 million people will move to developed countries annually until 2050, and more than half will come to the United States.

Some of best educated and most successful, of course, will then go back home, as has been case throughout most of American history. But many more will stay, often for very mundane reasons, such as the chance to live in a dwelling larger than a shoebox or to have more than one child. Others will cherish the chance to live without worrying about the depredations of some party bureaucrat, caudillo or religious fanatic. These immigrants are not seeking a spot on the Titanic. They realize that, despite its many failings, America is uniquely able to reinvent and re-energize itself.

This greater diversity will become increasingly evident across an expanding landscape, including many once homogeneous areas like the Great Plains.

But the new epicenter for diversity will lie in the once overwhelmingly white suburbs, which now increasingly are settled by minorities and immigrants. An absolute majority of our foreign-born population now lives in suburbia, up from 44 percent in 1980.

Already the best places to find ethnic shopping complexes, Hindu temples and new mosques are not in the teeming cities but in the outer suburbs of places like Los Angeles, New York and Houston. In most immigrant-rich suburbs, you find alongside the temples and mosques churches and synagogues.

Unique in the World

In contrast to this growing diversity, the United States’ chief global rivals seem far less able to accommodate this level of interracial mixing. China, Japan and Korea are culturally resistant to diversity and unlikely to welcome large-scale immigration, even if much of their labor force has to go to work in walkers and wheelchairs.

The changing ethnic population in the U.S. will no doubt play a leading role in the next economic transition.

Recent newcomers have already distinguished themselves as entrepreneurs, forming businesses from street-level bodegas to the most sophisticated technology companies. Between 1990 and 2005 immigrants started one-quarter of all venture-backed public companies.

Large American companies are also increasingly led by people with roots in foreign countries, including 14 of the CEOs of the 2007 Fortune 100. Even corporate America — once the almost-exclusive reserve of native-born Anglo-Saxons — will become as post-ethnic as the larger society.

The America of 2050 will seem, to some, a very different and even foreign country. Yet our continuing racial evolution confirms the basic dynamism of our society and its ability to adapt. Our experiment with creating what Walt Whitman in 1855 described as “the race of races” will represent one of the great accomplishments of mid-21st century America.

INVITE JOEL TO SPEAK
Forced March To The Cities